Skip to the end of the images gallery

Skip to the beginning of the images gallery

The Mark of Legends.

Immense power. Phenomenal speed. A remarkable combination of innovation and refinement. The new EOS-1D X Mark II camera is nothing but legendary every step of the way. Building on a heritage of sophisticated innovation, the EOS-1D X Mark II is blazingly fast. Up to 14 fps* (up to 16 fps* in Live View mode) can be captured at a burst rate of up to 170 RAWs with a CFast™ card, and an improved 61-point AF system helps deliver clean, sharp images quickly, even in dim light. This remarkable speed means faster recording too: 4K video can be recorded at up to 60 fps with smooth AF and strikingly clear detail. Combined with superb low-light performance thanks to its powerful sensor and expandable ISO range, the EOS-1D X Mark II performs brilliantly, swiftly and stunningly no matter when or where the photographer is shooting. From the stadium, safari or studio to virtually everywhere in between, the EOS-1D X Mark II maintains and enhances all the hallmarks of what Canon has to offer, marking a new page in the legacy of the EOS series of cameras.

Up to 14 fps* Full-resolution RAW or JPEG, Up to 16 fps* in Live View Mode
Delivering outstanding performance at speeds of up to 14 fps*, and up to 16 fps* in Live View, the EOS-1D X Mark II camera is loaded with technologies that help facilitate speedy operation at every step of image capture. The EOS-1D X Mark II features a new mirror mechanism designed for highly precise operation with reduced vibration even at incredibly fast speeds. The shutter unit is rated for 400,000 frames and captures at up to 16 fps*, while the CMOS sensor has high-speed signal reading that enables speedy image capture. A fast AF/AE system, Dual DIGIC 6+ Image Processors and high-speed recording with its new CFast™ card slot helps ensure that camera operations are performed quickly and precisely.

Dual DIGIC 6+ Image Processors
Key to the performance benchmarks achieved by the EOS-1D X Mark II camera, Dual DIGIC 6+ Image Processors not only convert the light that passes through the camera's sensor into high-quality photos and movies, but also enhance the camera's overall performance. Improvements include high-speed processing, up to 16-fps* operation for stills and 4K/60p movies, lens distortion and diffraction correction during operation with virtually no effect on the camera's speed, plus fast write times and much more. 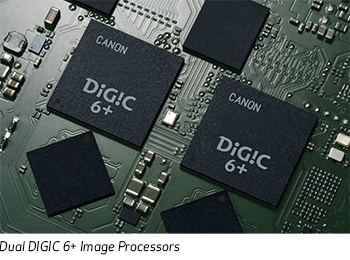